The DBA and the Inspirational Penguin 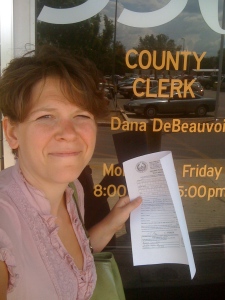 Filing for my DBA at the County Clerk's office.

Happy DBA day! I have just received word that there is now an official public record in existence stating that I, Kara Saunders, am doing business as the Brand New Theatre Co. in Austin, Tx! Considering the fact that it took all of fifteen minutes and $18 to file, my excitement may seem like a bit of an exaggeration but when you are in the early stages of establishing a presence for your business, you need all the reminders you can get that you actually are, in fact, “doing business.” Here is the other evidence I have so far: 1. A letter from a bank saying that I have a business checking account in the city of Austin. 2. A website. 3. Several social networking outlets (Facebook, Twitter and this blog). These are all very good signs, however, there are some pieces of evidence that are glaringly absent at the moment, most notably: 1. A studio. 2. Students. 3. A daily routine that actually involves teaching people and creating theatre.

I’m so close to having these things I can feel the floor of the studio space on the soles of my feet but waking up every morning to another day of not seeing it in reality can be very discouraging. It would be easy for me to look around and say, “It does not appear that I am actually doing business at all. I suppose I should stop trying.” That’s why receiving my DBA is worth celebrating. It is one more tangible expression of the fact that I am actually doing this.

Actually doing something you want to do is a funny process. Consider how many things you think about doing in a day compared to the number of things you actually do. The second an idea (however small) occurs to you, your brain files it into one of two categories. There is Category A: I’m thinking about it but I know I’m not actually going to do it and there’s Category B: Hmmm…I think I really will do that.
Here are some highlights from my personal Category A:

So, with a list like that, how does anything get moved to category B? In my case, I was faced with some really painful realities that made the transition seem less terrible than the present. I know that’s not exactly the most inspiring statement. Perhaps it would be more impressive to say that the shift was brought on by “passion for my work,” or “determination to overcome obstacles,” or “a perfect love for my art form that has the strength to cast out all fear.” Any one of these phrases would be a great start for a motivational poster. But the truth is, at the point that I made the decision to commit to BNTC, I was identifying a lot more with those “demotivational” posters from Despair Inc.

Some of you may know that I developed some health problems when I lived in London. When I came back to the US, I dug straight into what turned out to be a surprisingly long period of desperately attempting to move forward with my goals (namely: getting my visa and becoming gainfully employed in the UK) but being knocked down at every turn by an illness that began to seem incurable. As the wait for my visa grew from weeks to months, the wait for my health to return grew from months to a period of about a year. Needless to say, this gave me some time to reflect. In the end, my reflections resulted in the following “category shifting” conclusions:

So, that’s what I’m doing. Due to events beyond my control I have been driven to the desperate decision of actually taking a risk and following my dream.  It’s not so much my Aspirations that have brought me to this point as it is my Limitations. 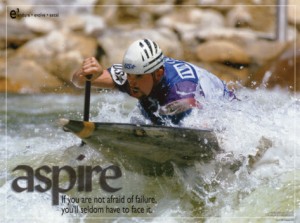 Actual Motivational Poster - "If you're not afraid of failure you will seldom have to face it" Really? I'm pretty sure that guy hit a big rock right after this picture was taken. 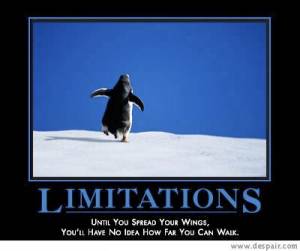 Demotivational Poster "Until you spread your wings you'll have no idea how far you can walk." - Yep...that pretty much sums up what I'm feeling right now.

Every day I get up and try my best to actually keep doing things. I do not feel that I am soaring on the wings of my dreams but I do feel good about trudging forward the best that I can. I want everything to come together right now and work out perfectly but it doesn’t work that way. It’s a long slow trudge from here to the fulfillment of my goals and the scenery is bleak, with miles to go between little sign-posts of success. That’s why I’ve become so attached to the Demotivational Poster with the penguin trudging along a barren landscape. I too have spread my wings! Now I just have to keep waddling along until I get somewhere.